Please Share So That We Can Reach More People, It Really Helps!

How Donating and Selling Your Old Clothes Benefits Everyone

The Benefits of Donating and Selling Your Clothes

The benefits to you specifically from donating and selling your old clothes won’t be the focus here. They are fairly straightforward: you will be making progress towards decluttering your home, and you will get some degree of financial compensation (tax deductions from donations, more and immediate money from selling). Those are both great, and we really hope that you take advantage of the opportunity! But there’s a much bigger picture than you might realize.

Instead, the focus of this article will be on the benefits to others. The benefits to the environment, and people in need, of donating and selling your clothes are quite dramatic. We hope that you find this information as enlightening as we have! We’re going to skew towards a focus on donations rather than sales, but many of these benefits apply to sales too.

How to Donate Your Clothes

We’ve written an article about How to Get Rid of Clothing in which we give you some guidance on where you can either donate or sell your clothes. Before we get to talking about the benefits of donating and selling we want to make sure that you know that you can take a look in there if/when you decide to declutter by donation! (We highly encourage you to do this.) 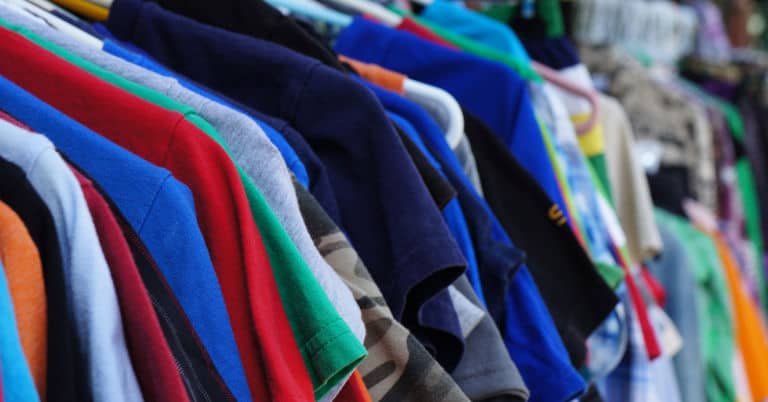 The Social Benefits of Donating Clothes

It’s likely the social benefits of donating that you have in mind when you consider this option. And there are, indeed, social benefits. We personally know many families that shop primarily at “thrift stores”, either charitable or for-profit, that get their inventory primarily from donations. These are mostly families with parents who would struggle to clothe their quickly growing children if they didn’t have access to inexpensive clothing from such establishments.

How Many People Benefit From Clothing Donations?

According to Examining the Demographic Profiles of Thrift Store Donors and Thrift Store Shoppers from faculty at the University of Evansville and Coastal Carolina University, The Salvation Army USA alone in 2008 provided at least some service for 30 million people in need. Other charities like American Red Cross, Goodwill, even local homeless shelters, extend that reach extremely far, both in the US and overseas.

Finding an exact number of people who benefit is extremely difficult; we have looked for hours, and no international organizations seem to have published an answer to exactly this question. So instead we’ll just paint a very broad picture to give you an idea.

When you donate your clothes to a local entity like a homeless shelter, women’s shelter, or religious organization, those items are generally used right there by those organizations to benefit people they deal with every day. So it will be some subset of their clientele that benefit.

When you donate to a large, international organization like the Salvation Army, the Red Cross, or Goodwill, it’s much more complex. The first thing to note is that all of the clothing is sold, even the clothing that goes overseas. It’s the proceeds from those sales that these organizations use to fund their projects, which can range from employment services, to disaster relief, to health-care-related work; this work is, generally speaking, domestic, in the US or Canada or wherever you donated your clothing.

The clothing overseas then becomes a part of the local economy, bought, sold, and donated by people in the recipient countries.

This truly barely scratches the surface of the answer to this question, but that should give you a general idea of how it works. It is hundreds of millions, possibly billions, of people worldwide that are touched either directly or indirectly by the trade in used clothing.

How Much Clothing Goes Overseas?

The used clothing market is massive. According to United Nations data, which is what we are referring to below and which you can explore here (look for the “worn clothing” commodity), the used clothing industry worldwide has a trade value of almost 135 billion dollars. (That’s a complicated statistic, but the gist is that it involves the value of both imports and exports worldwide.)

North America–primarily the US, but also significantly Canada and to a much lesser extent Mexico–has a net export of about 11.5 billion dollars worth of worn clothing.

The destination is primarily sub-Saharan Africa. Sub-Saharan Africa imports as much worn clothing, more than 14 billion dollars worth, as Europe’s Commonwealth of Independent States (not the EU, these are a group of 9 countries in Eastern Europe), Latin America, and Southern Asia combined.

What Happens to Used Clothing that Goes Overseas?

Next time you see footage of people in sub-Saharan Africa, pay attention to what they’re wearing. It isn’t at all uncommon to see people wearing shirts that say “I Love NY”, or logos for American sports teams.

Fun fact: team jerseys and other merchandise are pre-printed for both teams before championship finals (before the Super Bowl, for example), and the losing team’s clothing can be seen in countries around the world where used clothing is donated.

When the clothing goes overseas it is sold very cheaply to developing countries, and typically either bought and re-sold by local merchants in local markets, or donated by organizations local to those countries to people in need.

Donated clothes benefit a great number of people, both directly and indirectly, in a several different ways.

If you are able to donate your used clothing rather than disposing of it in other ways, we absolutely encourage you to do so. Think about an issue that you feel strongly about, such as local homelessness, women’s shelters, disaster relief, blood donations, or the poor overseas. Then do some research to find an organization, local or international, that deals with that issue and accepts clothing donations. You will help.

The Environmental Benefits of Donating or Selling Your Clothes

You might not think of benefiting the environment when you’re dropping off your clothes for donation or sale. But the benefits are huge! We’ll outline several here, but the topic is quite a deep one. The supply chain for fashion is very long and complex, as it goes from farms of the cloth fibers, to cloth production and dyeing, to manufacturing, shipping, and selling to us. As you’re about to find out, the impact is surprisingly large.

How Much Waste Do Textiles Generate Per Year?

This blew us away–that’s just one year’s worth of old clothing! This is from data generated by the EPA, which you can find here. With more than 11 million tons ending up in landfills, it isn’t difficult to see how keeping some of that waste out of the ground by donating it instead could have a direct positive impact on the environment. That doesn’t even take into consideration the indirect result of having to produce less new clothing, since the old stuff stays in use.

What Is the Carbon Footprint of the Fashion Industry?

The United Nations Environment Program found that the fashion industry is responsible for about 10% of all annual global carbon emissions.

The fashion industry worldwide–most of our clothes come from overseas–uses about 93 billion cubic meters of water per year. When new clothing is made, about 87% of the fibers are either incinerated or end up in landfills. You can find a discussion about these statistics and more by the World Bank here.

How Much Water Does the Fashion Industry Use?

There is a very interesting study that you can find in A Water Footprint Assessment of a Pair of Jeans. It takes about 3,233 liters (854 gallons) of water to create one pair of jeans, from growing to the plant fiber to you putting them on. Yes, 3,233 to 1, that is not a typo!

There are some interesting and fun interactive tools that you can find from the Water Footprint Network. Check them out!

We wrote this article because we were truly taken aback by the impact that an act as simple as donating (or selling) your used clothes can have. Both socially and environmentally, this is quite an important issue.

We understand that we may seem to have come down quite hard on the fashion industry, but that wasn’t actually our intention. We’ve cited only reliable information which, if it’s even in the ballpark of being right, shows that producing new clothing is very rough on the environment.

We didn’t even dig into the details here about disposing of chemical waste products from dying and treating new garments, or forested areas that are cleared to make room for crops used for industry. We aren’t against having new clothes, not at all! We simply hope that we all become more conscious of the indirect, unseen impacts of our daily choices, and the ways that we can help to alleviate those impacts.

We really hope that you’ve found some helpful and interesting information here. The topic is quite a rabbit hole, and you can dig into it even more by exploring some of the references we’ve used.